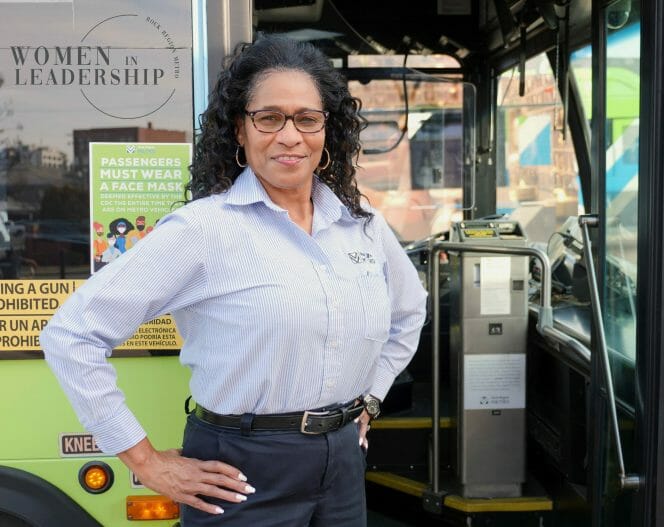 Sandra Profit, METRO Local and Express operator, joined the agency in 2019 after moving from a 24-year stint driving buses for the San Diego Metropolitan Transit System.

A Little Rock native who had raised four children before returning to her hometown, Profit began her professional driving career as a school bus driver, which allowed her flexibility as a parent and a way to demonstrate how women could break into the profession.

Faced with summers without paid shifts and needing more income for her family, though, she enrolled in a professional driving class for transit operators to pursue her long-term career goals.

“I love being outside and working with people. I find it rewarding. It’s a way of ministering,” said the former pastor. “A smile is a prayer.”

A member of the Amalgamated Transit Union since her time in California, where she drove large articulated buses, Profit said when she returned to Little Rock, she felt like she could contribute to creating a culture of professionalism and foster a good rapport with her colleagues. She was initially asked to serve on the union’s leadership team as vice president and was later asked to serve as president, becoming the first female president in the union chapter’s history.

Asked what leadership lessons she has learned during her tenure as the Amalgamated Transit Union Local 704 president, Profit instantly replied, “I’m not a man, and I don’t have to do things like a man.” She continued to say that it’s important to command respect, and, as part of that, she proved herself as the chapter vice president. She said members understand her leadership style, which involves building a consensus and allowing people to change their minds on topics.

“People know what they’re going to get [with Profit as leader],” she said, which she attributes as the reason she has been able to gain respect from her peers.

A former East Little Rock 6th Street neighborhood resident, where she used to teach dance at the community center, Profit said she learned the Little Rock street grid from driving. Asked what she likes best about serving the public as a METRO fixed route operator, she said, “I love people, love making people have a good day. I like to ask, ‘How may I assist you?’ and treat people with kindness so they can take that with them throughout their day.”