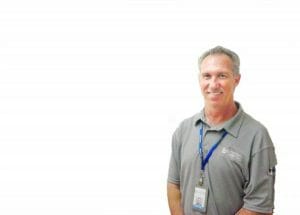 Meet David Bryant. He’s been driving Rock Region METRO buses for more than 20 years! In March 1998, David took a bus to his job and while on-board heard of an open position at the Central Arkansas Transit Authority. When he went in for the interview he already had another job offer on the table. After his interview, however, David only had one job he knew would be right for him. For the last two decades, David has seen the scenery, terrain and faces of central Arkansas change like no one else.

What are David’s favorite moments from the past 20 years?

“I’ve loved being able to watch my riders grow up.”

David said some of his most memorable passengers are the ones that he’s been carrying since he started in 1998. He loves to watch people get on and off the bus every day and he says the greatest feeling is knowing you have helped them get around for a majority of their lives.

“Meeting people and walking a mile in their shoes is what it’s all about.”

In addition to helping out the citizens of central Arkansas, David’s fondest memories include meeting former President Bill Clinton and a variety of celebrity impersonators. David loves working for Rock Region METRO and says that working somewhere you love is what makes all the difference.

“Meeting people and walking a mile in their shoes is what it’s all about.”

David drives Route 3 Baptist Medical Center and Route 14 Rosedale and says you’ll always be greeted by him with great customer service and a smile. Aside from serving the residents of central Arkansas, David loves to travel on his days off and said he can always be found with a Dr. Pepper in his hand.

“I have an addiction to Dr. Pepper. My fridge is stocked to the brim like the commercials.”

David loves living in Arkansas, going to the movies and spending time with his family.

If you ride Routes 3 and 14 today or see him around town, be sure to thank David for his service to Rock Region METRO and his dedication to making central Arkansas a more transit-friendly place to live.