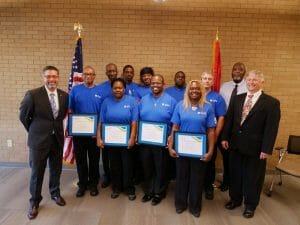 “Operators and mechanics are critically important to the success of our industry,” said METRO Executive Director Charles Frazier. “They are responsible for the safe operation of our vehicles and passenger trust. Our team wants them to know how much we value their contributions to our agency.”

The graduation ceremony featured an overview of the training program, a message outlining the partnership between METRO and Amalgamated Transit Union Local 704, remarks from Frazier and a keynote message from Dr. Margaret Ellibee, chancellor of the University of Arkansas Pulaski Technical College, who thrilled graduates with her story of early teaching days in rural Arkansas and the stick-shift, school bus-driving duties that came with the job.

“METRO hires roughly 45 employees on average each year. Sixty percent of METRO operators have a tenure of 5 or more years on the job. As our industry faces increasingly stiff competition for qualified workers, it is critical to celebrate the successes of our employees and make sure they have a path for achieving their goals,” said Frazier.

The METRO team expects to host three graduation ceremonies each year to welcome new operators and mechanics to the agency.